"A Big Idea, A New World Order" (From the Archives)

WWW, February 2005 (Archived) - "New World Order? There is no such thing. It's all a wacky conspiracy theory. You listen to too much Reggae Music and read too many alternative news stories. Can't you see we are being viciously attacked by Muslim Fundamentalists who hate our freedom and are ready to kill to steal it away from us?"

It's sad to realize how many people are led to believe that the above is common sense. Not just because it's everything but sense, the most scary part is the underlying philosophy. And the fact people are actually being held slaves of this philosophy.

A total surrendering of one's critical thinking in exchange for some feeling of security, or as the Bible cynically calls it "peace and safety", has nothing to do with freedom of course. Nevertheless, many are unable to see this logic as clear as they should.

So let's break it down, shall we?

The phrase "New World Order" makes the brainwashed citizen smile when he hears it. Especially when he considers himself to be part of the establishment. He completely forgets how the term was re-introduced by the father of the current King of America, King George II. Exactly 11 years before 9/11, on September 11 2000, George Herbert Walker Bush responded to the alleged fall of communism with the words:

"It's more than one small country. It is a big idea, A New World Order".

And King George The First didn't introduce the phrase either. Everyone can read it in Latin, the language of ancient Rome, on the American One Dollar Bill. 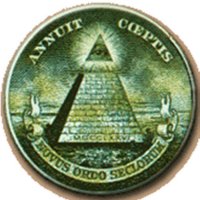 - Announcing the New World Order on the One Dollar Bill -

"Annuit Coeptus Novos Ordo Seclorum" translates as "Announcing the year of the New World Order", although the official story is that it stands for "New Order of the Ages". Does it matter? Of course not. After all, the NEW AGE Movement is only a branch of this New World Order. And the word "Seclorum" can be translated into "world" are well as "age". Every scholar can tell you that.

The year which the New World Order is announced is also written on the Dollar Bill: MDCCLXXVI. For those who can not read the language of the ROMAN EMPIRE, that year is 1776.

In that year, the secret society of the Illuminati or enlightened ones was founded by one man called Adam Weishaupt. This in itself was just another step in that process which started way back in ancient times when Nimrod founded Babylon and had his slaves built that famous tower, the first world trade center.

So yes, there is a New World Order. It is announced way back in 1776 when the Illuminati were formed. And yes, it is a big idea, an idea from ancient times. From "all ages" indeed.

An idea which was formed long before Islam was there. Even long before there was a mention of Israel. So to say that this New World Order is only a reaction to vicious attacks by freedom-hating Muslims doesn't hold substance.

The New World Order was planned centuries before any of the organized religions came into existence. This can easily be figured out after researching the matter.

Every religion is a system of enslavement and comes straight out of Nimrod's Head Quarters. Nimrod ( the founder of Babylon) was also the one who started the process we know as globalization. A process aimed at creating a New World Order.

The modus operandi (working method) of the Globalists or the Babylonians is highly sophisticated and carefully developed over many centuries. But throughout the ages, the basic principal has never changed.

And when this principal is recognized, it becomes evidently where the so-called Freedom Hating Muslims get their motivation from and why they do what they do.

And they are very successful in doing so!

"Wait a minute", I hear you say. "Isn't the government defending our freedom from these evil terrorists? Didn't the government declare a War on terror? Were you deaf when President Bush bravely announced he would smoke Binladin out of his Afghan cave so that we could stay free? Didn't you get the fact that Saddam is now removed from power because he threatened our freedom with Weapons of Mass Destruction?"

Oh yes, the WMD's. "They got to be somewhere", King George II told the established press in one of his "fun raisers" Oh yes, Binladin. King George said that Osama wasn't the main target anymore either since he wasn't able to commit terrorist acts that much any longer.

Oh yes, Saddam. We all know how he was funded and trained by the CIA. After all, he was one of their assets. But what do all these things mean? Why did they give Saddam Hussein WMD's, only to use that later as a pretext for invading Iraq? Why did they also train Binladin and made him into the monster he now is? Why did 9/11 happen anyway?

The white-wash committees cook fairy-tales for a general public, which starts to sense that there is something fishy surrounding this all.

The whitewashers want us to believe that "Intelligence Agencies were incompetent". In other words, they: "were too stupid to foresee the tragedy".

Their solution is as simple as it is evil. More control and money for the ones who didn't prevent the terror events, so that they will not screw up again.

In reality, the terrorists attack us because they want to take away our freedom and they are succefully doing that because with every new terror event more freedom is indeed taken from the people.

The terrorists have exactly the same agenda as the governments. Both sides on the "War on Terror" clearly have the same goals and even practices.

So the question arises: "Who Are The Terrorists?" Who are the ones using traumatic events to scare the people into trading their liberty for security? Freedom for slavery?

Oh yes, a lot of people don't see it because they were never taught to be free in the first place. They do not miss their freedom even when it is taken away from them. They mistake liberty for slavery!

And so the more terror events take place, the more they will scream to the government to take their freedom away from them.

And the more they will become angry at free-thinkers: "Who cares about freedom of speech when those evil terrorists are out to get us?", you hear them again and again.

When you study all of this, there is no doubt. The New World Order is a plan, an agenda, founded way back in ancient times. We know it as globalization.

Because our Creator has given us the right to liberty, naturally we would never accept the New World Order. Not now, and not then in the times of Nimrod. We're simply not created to be slaves.

After all, when a (wo)man is free, (s)he can go through the process of a personal development which is in the end beneficial for all.

When the problem is terrorists taking away our freedom, the government's solution is to take away our freedom. They can only do it because the people are led to believe that liberty should be traded for security.

That is why the Globalists have created Muslim fundamentalism.

And now you also now why.

It's all part of the modus operandi of the New World Order. And scholars know it as "Problem - Reaction - Solution".

Create a Problem, only to make the people React by demanding a Solution.