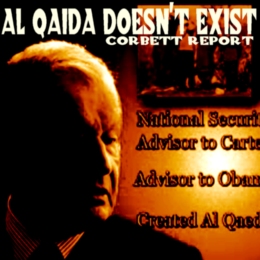 WWW, February 2009 - Within hours after the attacks on 9/11, the media had all kinds of experts telling us it was "Al Qaeda". But what really is Al Qaeda, actually?

No so many people had heard the names Al Qaeda and Osama Bin Laden before the attacks on 9/11. That changed very soon after these terrible events, when the media were crawling over each other to tell a traumatized public all about this figure who ran things from caves in Afghanistan. In the mean time, he has become the symbol for just about every terrorist incident anywhere on the world.

The Corbett report dives deep into Al Qaeda and Osama Bin Laden, revealing where they come from, who they are, and who they are not. The information may surprise you, especially when you know that the myths are used until this very day to keep people under submission.

It may surprise you, that basically Al Qaeda was founded by none other than the current advisor of Barack Obama: a man called Zignew Brzezinski. All in the name of freedom and democracy, of course...

Just one fact uncovered in this great documentary, a must watch for everyone even remotely interested in the world we are living in.