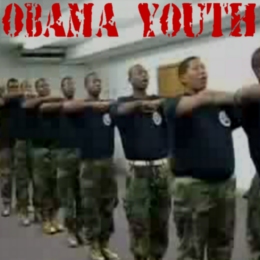 WWW, February 2009 - When Bush does it, it is wrong. When Obama does the very same thing, it is allright or, as some would say: "Ire". Has Babylon managed to recruit a new army?

"God Bless Amerika With President Obama", or: "Yes, We Can, The Battle Has Been Won". Just two random quotes from an ever-growing list of Reggae tracks praising the president of the USA, justifying the conclusion that we have a new trend. A better observation, however, would be, that Babylon has recruited a new army to join her legions in creating the New World Order.

A recent celebration of the inauguration of Barack Obama at Jamaica's Rebel Salute festival had organizer Tony Rebel recorded as saying: "Me no sey him come fe make the world better, but him change how we look pon things." (SOURCE).

Is this dangerous? Asking the question is answering it.

It has already become quite obvious, after the initial election of Barak Obama, that he will do nothing but continuing the politics that his predecessors. Killing people in Pakistan, including children. Giving huge sums of money to eugenics projects in Africa. For example...

Another example can be found in Kansas. In this video, which has been taken before Obama was elected, we see a group of youth entering a classroom with military steps and attitude. It turns out, that they are the "Obama Youth Junior Fraternity Regiment".

Just like six decades before, in Europe, there was a man who inspired children to gather in "regiments" to basically worship the Leader and have a military approach in everything else as well. Their name does not have to be mentioned in this review.