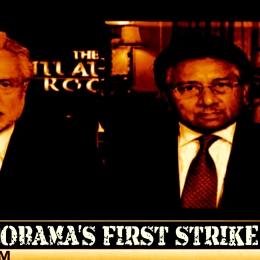 WWW, January 2009 - Under the new Obama administration, the so-called "War on Terror" is business as usual: last week, the US military launched two missile attacks against people in Pakistan.

Many people have protested against the wars that George W Bush and his group pulled the world in. Many people point out to the new president Obama as he has rhetoric's about leaving Iraq, but they forget the fact that Barack Obama left the same guy in charge of the military.

Even stronger, Obama made it clear that those who are against the war should not count on him and last week this became painfully clear as the US military attacked people in Pakistan, killing 17 under which two children.

Check out this short interview that CNN's Wolf Blitzer had with the president of Pakistan on Obama's first strike...