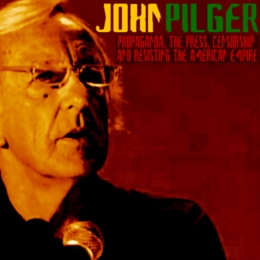 WWW, January 2009 - He's been at just about every place where a major war went on: John Pilger, Australian journalist and film maker. And he's talking about it, too!

In this video, an episode of Democracy Now, we can see Pilger as he gave a speech in Chicago in 2007. He takes us back to the second world war, straight up to the current times as he anticipates the fact that Obama replaced George Bush as president of the USA.

Pilger is an independent journalist and film maker from Australia, and he has been a witness to the many crimes committed by the powerful. He saw the suffering in Vietnam, in Eastern Europe during communist dictatorship, and he sees it now in Iraq and Afghanistan.