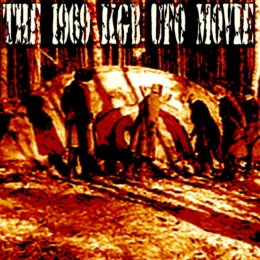 WWW, December 2008 - Are UFO's real and do the governments of the world know more than they care to admit through their official channels? When this movie turns out to be real, the answer to both questions must be "yes".

The year is 1969 and Europe was still divided by the Iron Curtain. The Cold War was at another peak and no information seemed to cross the border of the East and the West.

It was in this time, that the video reviewed on this place is said to have been recorded. By the KGB, to be exact. A number of Soviet Soldiers are seen as they're transported to a place with trees, and what seems to be a crashed UFO.

There's guards all around the UFO, that isn't really flying by the way. The thing seems to have crashed straight into the ground, and only half of the disk is above ground. We take a closer look, even some close-up's, as the movie is recorded at the instructions of what seems to be a KGB officer.

Is it real? Yes, say the producers of the video "The Secret KGB UFO Files". And, indeed, this is very well possible: after all, the movie was bought in post-communist Russia, in a time wherein just about everything was for sale. Including secret documents of the KGB.

It is not too far-stretched, though, to see the movie as an illustration of the fact that throughout (modern) history, different governments were actively trying to find out just what's going on, if not having direct contact with the intelligent beings behind the UFO's.