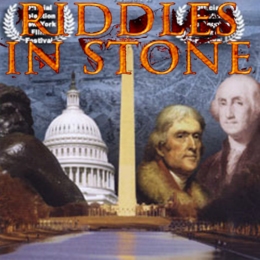 WWW, December 2008 - Subtitled "The Secret Architecture Of Washington DC", this documentary takes us straight to the USA's capital where we discover the religion of many "Founding Fathers" and presidents until this very day.

It's a well-known fact, that Washington DC as well as other places in the USA are built by members of the Freemasonic secret society. The Freemasons are the perpetuators of the ancient Babylonian Mystery Religion, even though there are many who think of the secret society as some kind of social club for aging old men.

In this documentary, we see several people interviewed about Freemasonry and more specifically, the Freemasons who are now known as the "Founding Fathers" of the USA. We see the various Freemasonic buildings like the White House, the Washington Monument and others, and we are introduced to some of the secret teachings of the Freemasons as well.

Even though we see proponents of Freemasonry denying that there is a Luciferian or Satanic aspect to the Freemasonic architecture of Washington DC, this denial becomes a bit ridicule in the midst of the evidence and interviews that we find in other parts of the almost three hours long video.

Well worked-out, interesting and relevant: Riddles In Stone shows without the shadow of a doubt that all these talks about the "Christian Nation USA" needs some side-remarks, to say the least!