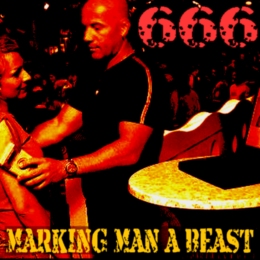 WWW, October 2008 - The Apocalypse tells us, that some day mankind has to wear something called the Mark of the Beast in order to buy and/or sell. Is this "just" an economic thing, or is there something more sinister behind the number 666?

Implantable chips the size of a grain of rice, carrying all of our information including our financial situation. We just walk into the supermarket, take what we want, and the money is automatically taken off my account straight into that of the supermarket.

A situation that is no longer Science Fiction. Years ago, the Babylon Observer reported how the Baja Beach Club introduced such a thing and the owner spoke openly how he "believed wholeheartedly in the chip-system" and "it could be a global passport".

In the current financial crisis, we see the call for a Global Summit of the financial elite. We see people calling for a global currency, now that the Dollar will obviously fall and fail to continue to be that global currency it was until this time.

In the same time, New Agers like Peter Joseph make movies like "Zeitgeist" wherein they lay down the blueprint of the New Age society. People who think that they are against the Shitstem we call Babylon are fooled en masse into calling for the New World Order that will ultimately give us that World Leader.

This World Leader will cause everyone to wear the Mark of the Beast, without which no one can buy/sell. The scene is set for it, the waiting is for the "right crisis".

But is this just about the money, or is there something more going on?

Those who research the origins of Mystery Babylon that will bring us the Mark of the Beast, know that the System is set up to re-install the situation as it was, according to the Bible, "in the Days of Noah".

The proponents of the Mystery will rather speak about that situation by a different name, though. That name would be "Atlantis".

Fast forward to our time again. We live in the days wherein Universities have conferences about the "Post-humans". The "next step in the evolution of mankind" is announced, and expected.

We have allready passed the stage wherein people can be chipped so that they don't have to carry a wallet anymore. Where IBM marked the concentration camp victims, they are now part of developing the RFID chip that will mark every one.

But it goes further, as we see when we look at Universities like Oxford who have conferences about the "Post-humans". Literally, this word means "men that come after men". Hitler's "Neue Mensch"!

The technicians are working hard making it possible for man to fuse with machines. In order to become a "Post-human", you will have to have a little bit more than just an implantable chip.

And exactly that is written in the Apocalypse, when this Mark, this Chip if you will, is called the Mark of the Beast. The Apocalypse also indicates that those who take that mark are no longer considered to be eligible for the Salvation that the Creator made possible for all.... human beings!

In other words, you will no longer be a human being, when you carry the Mark of.... the Beast.

Whatever that Mark may ultimately be, it will mark you as a "Post-human": a Beast.