"THE DAY THE DOLLAR DIE" 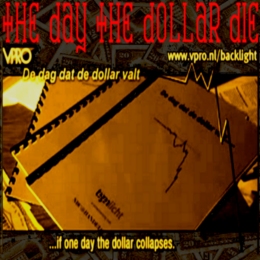 WWW, October 2008 - In this 2005 documentary, we see a fictional account of a 24 hour period that starts with the "Mighty Dollar" on top and ends with somebody in Amsterdam paying her taxi-ride with a few packets of cigarettes.

When Peter Tosh sang "The Day The Dollar Die", he didn't refer to an impossibility. His song was not a dry economic lecture or crazy conspiracy theory, but it did refer to economics and conspiracies that throughout the years have become more and more clear for people to see.

When he sang his song, it was still the 1980's. There was no Internet and the Mighty Dollar was the undisputed World Currency. The American Money Press simply came up with the paper money that people used to pay each other.

Many would simply ignore the message of Peter Tosh, or even write it off as the phantasies of a drugged-out individual.

In 2005, however, reality has become more clear and although this is a fictional account, the video reviewed on this page makes it very clear how the Dollar can die in one day, leaving the world at the edge of a world war and people paying their taxi rides with a box of cigarettes rather than paper money.

In 49 minutes, we are taken through this 24 hour period which is written by established Dutch journalists. As he paints his fictional scenario, we're taken directly to interviews that confirm the possibility, even probability, of that day which Peter Tosh sang about.

NOTES BY THE MAKERS:

VPRO Backlight and Dutch national newspaper NRC Handelsblad present this 'what if' scenario. What if the dollar collapses? Fiction meets facts in this 24 hour scenario. At 9AM a Singapore trader is ordered to sell a large amount of dollars, which sends off the enormous downfall of the dollar. This film shows the results for the world economy every following hour. It ends in Amsterdam, where the only currency accepted by a taxi driver is Cigarettes...

History seems to have caught up with this 2005 film, though in slow-motion...

Email ThisBlogThis!Share to TwitterShare to FacebookShare to Pinterest
Labels: Topic: The Game Of Global Engineering