WWW, 2005 (Archived) - Increasing reports of Iraqi men, women and even children being dragged from their homes at night by American patrols, or snatched off the streets and taken, hooded and manacled, to prison camps around the capital.

Children as young as 11 are claimed to be among those locked up for 24 hours a day in rooms with no light, or held in overcrowded tents in temperatures approaching 50C (122F). 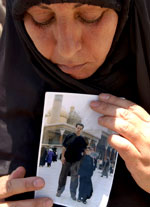 Despair: Ghania Hassan says that her eldest son is being held as a looter for eating a biscuit given to him by a US soldier

NEVER again did families in Baghdad imagine that they need fear the midnight knock at the door.

But in recent weeks there have been increasing reports of Iraqi men, women and even children being dragged from their homes at night by American patrols, or snatched off the streets and taken, hooded and manacled, to prison camps around the capital.

Children as young as 11 are claimed to be among those locked up for 24 hours a day in rooms with no light, or held in overcrowded tents in temperatures approaching 50C (122F).

On the edge of Baghdad International Airport, US military commanders have built a tent city that human rights groups are comparing to the detention camp at Guantanamo Bay in Cuba.

Remarkably, the Americans have also set up another detention camp in the grounds of the notorious Abu Ghraib prison, west of Baghdad. Many thousands of Iraqis were taken there during the Saddam years and never seen again.

Every day, relatives scuff their way along the dirt track to reach the razor wire barricades surrounding Abu Ghraib, where they plead in vain for information about the whereabouts of the missing.

The response from impassive American sentries is to point to a sign, scrawled in red felt-tip pen on a piece of cardboard hanging on the barbed wire, which says: “No visits are allowed, no information will be given and you must leave.”

Some, like Ghania Hassan, sink to their knees in despair. She holds a photograph of her eldest son, Mohammed Yasim Mohammed, a 22-year-old student. She said that he was walking through al-Shaab market with friends when passing troops saw him eating biscuits from an American military ration pack and accused him of being a looter. Allegedly he was pushed face down on the street while his friends tried to explain how a soldier a couple of streets away had given them the biscuits.

A month later nothing has been heard of the young man. His mother showed a fistful of letters and petitions that she has collected from US officials, local magistrates and a Muslim cleric, but she and the rest of the complainants were told at gunpoint to move away from the prison gates.

Such behaviour merely fuels the growing hostility between local people and the soldiers they had welcomed barely three months ago.

Families will naturally protest the innocence of their relatives, but the accounts, such as that of Aliah Khadoum, who describes how her son went out to buy cigarettes on June 1 and was arrested for breaking curfew, are rarely allowed to be tested by the local magistrates, who have begun daily court hearings in the capital.

Elizabeth Hodgkin, of Amnesty International, who has a bulging case file of arrests, said: “I cannot believe the Americans are so stupid and insensitive as to behave like this after all the trouble they have had over Guantanamo Bay. They must treat their detainees humanely and let them have visits from family and lawyers.”

Amnesty claims that 80 minors have been detained, accused of petty offences including writing anti-American graffiti or, in the case of two teenage boys, climbing on the back of a US troop carrier to hitch a lift through a main street in Baghdad.

One of the most disturbing incidents concerns Sufiyan Abd al-Ghani, 11, who was with his uncle in a car that was stopped near his home in Hay al-Jihad at just after 10pm on May 27. The boy’s father heard a commotion and rushed outside to see him sprawled face down on the road with a rifle muzzle pressed against his neck and US officers shouting that someone in the car had shot at them.

Sufiyan was made to stay on the ground for three hours, while more than 100 soldiers poured into the neighbourhood, searching houses and cars. Eventually he was taken away with his hands trussed behind his back and a hood draped over his head. No weapon had been found. The boy said that soldiers dug rifle butts into his neck and back and that the first night he was handcuffed and left alone in a tiny room open to the sky.

The following day he was moved to the airport, where he said for eight days he shared a tent with 22 adults, sleeping on the dirt, with no water to wash or change his clothes.

Sufiyan said that he was pulled from the tent one morning, hooded and manacled again, and driven to Sarhiyeh prison, to be kept in a room with 20 other youths aged 15 or 16 — regarded as minors by the Geneva Convention.

A woman inmate took his name and details and when she was released she alerted Sufiyan’s family. On June 21, the family obtained an injunction from a judge ordering the boy’s release, but they were told at the prison that the signature of an Iraqi judge no longer had legal authority. Even when an American military lawyer demanded his freedom, US troops refused to release him until the lawyer appeared at the prison. Privately US military lawyers say that they are appalled at how some of the arrests are being carried out.

At the gates of Abu Ghraib, frustration and anger force men such as Adnan Akhjan, 38, a former civil servant, to shout abuse at the US guards.

Mr Akhjan, whose 58-year-old father was arrested three weeks ago for driving a truck with no doors or headlights, said: “People are so sickened by what is happening they talk of wanting Saddam to come back. How bad can the Americans be that in three months we want that monster back?”

US officials say that they are struggling to cope with the continuing looting, as well as attacks on troops. They say that until the fledgeling Iraqi police force is fully operational and jails are repaired, they represent the only law and order.

Each morning at the Red Cross headquarters in Baghdad there is a silent line of Iraqis queueing to find out where a relative might be. The American authorities have said that they will not inform the Red Cross about detainees until 21 days after they have been arrested. The International Committe of the Red Cross has been allowed to see some of the prisoners, but says that it cannot even begin to guess at the numbers detained.

An Iraqi exile who had been in Baghdad for only three days after living in Denmark for the past 27 years found himself caught up in an American swoop after a shooting in a street market. Not realising that the man could read English, his interrogator made no attempt to cover up his case file, which described him as “suspected assassin”.

The man, who was held for more than 30 days, is afraid to give his name and says that he is now considering leaving Baghdad for good.

Looters in Iraq should be shot and killed, according to experts working in partnership with the British Museum (Jack Malvern writes). Academics from the Iraq Museum in Baghdad, which has lost 13,000 objects to thieves, said that force was needed to protect Iraq’s heritage. Professor Donny George Youkhana, director of research at the museum, said: “We need armed helicopter patrols. They will need to shoot to be effective.”

Professor Elizabeth Stone, from Stony Brook University, in New York, said that all of Iraq’s 10,000 archaeological sites had been looted. “I would like to see helicopters flying over there shooting bullets so that people know there is a real price to looting this stuff. You’ve got to kill some people to stop this. It is a major problem.” 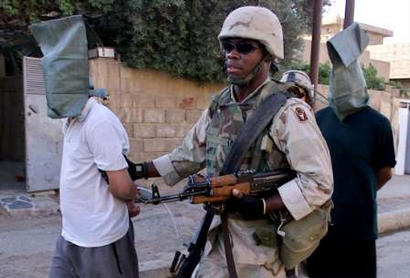 Email ThisBlogThis!Share to TwitterShare to FacebookShare to Pinterest
Labels: Article, Topic: Abuse and Torture, Topic: The Game Of Global Engineering