Iraq Raids are "Ugly Business" (From the Archives) 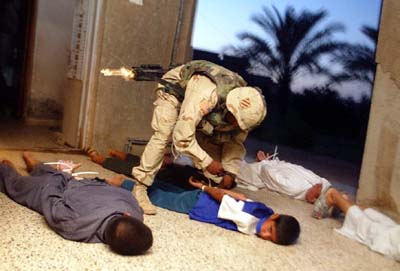 WWW, 2005 (Archived) U.S. Army Spc. Dandrea Harris handcuffs a family during a night raid in Iraq. More often than not the people are innocent.

Operation nets innocent people and a few of the most wanted.

TIKRIT, Iraq -- The roosters were just beginning to crow in that lost hour before dawn when Lt. Col. Steve Russell of the Army's 4th Infantry Division ordered his men to "go dark" and roll their Humvees up to the edge of a lone farmhouse here.


It was quiet, the village shuttered by a curfew. Desert wind rattled dry grass. One of the U.S. soldiers in the shadows lit a match to his cigarette. Then the radio sputtered, barely audible, a report from the reconnaissance patrol. "Movement on the roof."

The troops smashed an M2 Bradley Fighting Vehicle through the front gates. This is the unfinished work of the U.S. occupation of Iraq.

In an operation dubbed Desert Scorpion, U.S. forces gather intelligence from Iraqis by day then head out on raiding parties at night, hunting senior leaders from the government of former President Saddam Hussein. The operation began in part to stanch the string of attacks on U.S. troops that have killed 17 soldiers since May 1, according to the Pentagon and news reports.

It is, Russell said, "an ugly business, but it is the business we are in."

Russell's men come in like SWAT teams, ramming down compound walls. Children cry, women are terrified, and men are handcuffed and led away, sometimes with nylon bags over their heads.

More often than not they are innocent, or family members of the targets, or housekeepers or guards, and later released. Sometimes, as in last week's capture of Abid Hamid Mahmud, Saddam's trusted aide, they are among the most wanted men in Iraq.

By day, U.S. troops put on what one soldier in Russell's unit called "the smiley face." By night, during a raid, Lt. Chris Morris, leader of the scout patrol, said, "if I see some guy sticking his head around a wall, and he doesn't show me his hands, and then he pops out again, he's likely to get shot."

Here in Saddam's hometown, their efforts have produced results. In the past week, they snared not only Mahmud but a senior bodyguard for Saddam, a former brigadier general and a nephew of Saddam's who was caught with a gym bag filled with $800,000 in cash. In a raid at a farmhouse, they uncovered $8 million in $100 bills and plastic tubs filled with jewels.

Russell said he believed the money was used in part to pay for the low-level "triggermen" who are carrying out most of the attacks at the behest of former senior Baathists in hiding. Soldiers have found weapons caches buried in orchards and fields, including rocket-propelled grenade launchers and sniper's rifles, as well as night-vision goggles.

Yet the hunt also has turned up "dry holes," Russell said. On Saturday night, his men stormed a house in Tikrit, seeking the son of one of the 55 Iraqis who are most wanted by U.S. officials and whose pictures have been placed on playing cards. But the target had left the house three days before.

U.S. military intelligence officials suspect former Iraqi authorities are hiding out in Tikrit and its surrounding villages, especially the walled town of Auja, where Saddam and many of his closest aides and bodyguards were born.

Here, the search is being led by troops from the 1-22 Battalion, 4th Infantry Division, out of Fort Hood, Texas, with a Special Operations group moving throughout the region.

Their headquarters is a former Saddam palace on a bluff above the Tigris River. During the day, Russell and a few of his men make the rounds, visiting Iraqi police, officials in the interim government, tribal sheiks, friendly merchants and others who might be hearing about possible targets.

On a warm summer evening in Auja, Russell and his three Humvees pulled up to a mansion on the Tigris to meet with Sheik Mahmud Needa, an elderly leader of a large and powerful tribe. Just so Russell would understand whom he was dealing with, the sheik produced an autographed photograph of the late King Hussein of Jordan. "My brother," Needa said.

Russell played the courteous commander, drinking cups of strong Turkish coffee with Needa. Russell was willing to trade such things as weapons permits, or assistance for Auja's police chief, to receive information and build trust.

Needa's palace overlooks the lands where Saddam was born. The two are relatives, and their farms abut each other. "Everything will be better here," Needa told Russell, "when you catch Saddam Hussein."

Needa said his tribal council members had decided they would turn over to police anyone they suspected of plotting to harm Americans.

Russell told him, "I appreciate the great respect you have from your people and your efforts to secure a better Iraq for the future."

Russell said obtaining the cooperation of sheiks -- especially in Auja, one of the towns most hostile to U.S. occupation -- shows that the remnants of Saddam's government may be facing their final days of freedom.

Email ThisBlogThis!Share to TwitterShare to FacebookShare to Pinterest
Labels: Topic: Abuse and Torture, Topic: The Game Of Global Engineering