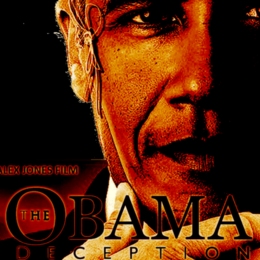 Where does Obama really stand for, and even more important: who are the ones behind him?

Alex Jones' 2009 production The Obama Deception is definitely one of his best so far. The video shows more than the title suggests, as the viewer is taken to the people behind the scenes: the Bilderbergers and other shady groups, where presidents and governors are selected before they are elected.

Some years ago, Alex Jones infiltrated one of these groups: the Bohemian Grove, where the leaders of nations gather to perform Babylonian rituals completely in the style described in the second Psalm in the Bible.

Both George Bush Jr and Sr are members of this organization, part of a bigger elite network that carefully prepare the world for their ultimate goal, the restoration of "Atlantis", or the Days of Noah. It's ancient, and known to some as Mystery Babylon.

But let's not go all the way back to ancient times. Let's just go back a few months, just before Obama and McCain ran the ritual called election campaign.

After eight years of George Bush, the country was at the edge of a revolution. At least, according to some. The invasion of Iraq, a terrible economic situation along with a growing police state: George Bush was to blame and so, a change was needed.

Not a change in policy, but a change of face, to be precise.

While multitudes are looking to what KRS-ONE calls "A Black Face On The New World Order", dreaming their dreams of equality and justice, Barack Obama does exactly that which his masters behind the scenes want him to do.

The documentary shows, how there's nothing good in their plans.

A "civilian national security force", for example. A draft, and massive prison camps in preparation for the riots as a result of the plundering by the bankers and others from the elite.

The very same elite that put George Bush in power, that is.

This, and much more, can and should be viewed by those interested in the "change" Obama really stands for.