THE MEN BEHIND BARACK OBAMA 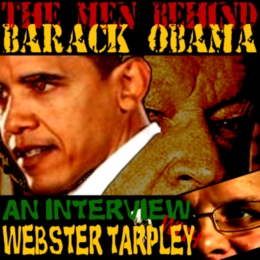 In this interview, we meet with Webster Tarpley during the presidential election campaign that ultimately led to the inauguration of Barack Obama. As the multitudes cheered on the streets, thinking that Barack would clean up the mess that George Bush left the country in, the Men Behind Barack Obama were already planning their perpetuation, even accelerating of the wars in Pakistan and Afghanistan.

"Beware of Obama", says Webster Tarpley. After a short introduction, he explains how it's not just so much about Barack Obama, but more about the men behind him. Zbignew Brzezinski, for example. As difficult as some might find it to even pronounce his name, as unknown he is to the general public.

Brzezinski can be called the founder of the Taliban, as the Babylon Observer reported earlier. And when Webster Tarpley is right, the man will soon be active in shaping politics in that area of the world once again. The historian fears how the USA and Europe will be led by Obama into a war that would involve Russia and China, and after you've heard him out, you might want to think again about the president of whom many think he wants to "make peace, not war"...