"IT'S THE ECONOMY, STUPID!" 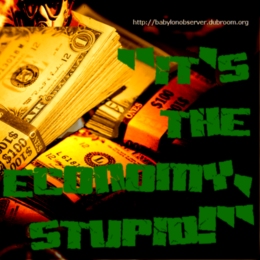 WWW, October 2008 - Just a month before the most notorious president of the USA will leave office, he gives a multi-trillion gift to his banker friends. The rest of the world, especially Europe, follows.

How the love for money surely is the root of all evil.

It is said, that US president George W. Bush has spent more money than all presidents before him combined. Throughout the eight years of his presence in the White House, he surely has become the symbol for all the crimes of the world elite.

Will he really go? When it turns out to be true what is written on several websites for several years now, George W will find one or another reason to postpone the election and turn what many think is the world's greatest democracy into the world's greatest overt dictatorship.

The current financial crisis which sweeps over the world could just be the very thing that will be used by the president to indeed postpone the election.

Every day, we hear on the news how the several important stock exchanges of the world had another "historical day". One bank after another goes bankrupt, and ministers of finance throughout the world act like magicians as they "inject the economy" with trillions and trillions of dollars. Money which will fade away the next day as the stock exchange will have another historical low.

Where does all that money go? In times wherein the so-called experts have to admit that all they know is that they know no thing, that question can't be answered. But the big bonuses that the CEO's take with them as their banks turn into government hands should give an indication.

In the Netherlands, it turns out that municipalities and provinces joined a group of 125,000 people who put their savings on an Iceland based Internet bank. The bank is bankrupt and the whole country is in turmoil as it is unsure whether people have lost their savings or not. The local governments have an even bigger problem as they lost money trusted to them by the taxpayers.

The Iceland-based bank was owned by a multi-millionaire who made his fortune in post-communist Russia. The latest news is that Russian money will be used again to pay the Dutch savers. The government of Iceland doesn't have the money, namely. The country is said to be.... bankrupt.

So, what is going on?

The current situation is far worse than 9/11. Where the attack on the WTC and the Pentagon would only reach people indirectly because of the idiotic Police State measure taken after the event, the financial crisis touches everyone where it hurts most people the most: in their wallets.

Many people have been wondering as to what would happen to give George W Bush the possibility to postpone the election. Stories about nukes in the city, terrorists here and there, this-and-that. But apparently, that trick won't fool all the people in this time.

Maybe the answer was given to us all the way, when another presidential candidate was quoted as saying to his opponent:

"It's the economy, stupid!"

Email ThisBlogThis!Share to TwitterShare to FacebookShare to Pinterest
Labels: Article, Topic: The Game Of Global Engineering