"IN THE BEGINNING": 6000 YEARS AND 6 DAYS AGO?
MESSIAN DREAD SPIRITUAL MEDITATION 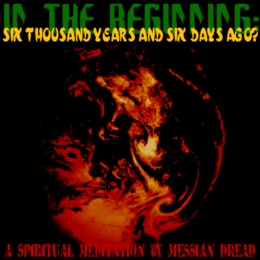 WWW, March 2009 - Is the King James Version 100% correct, when the translation seems to indicate that JAH created creation about 6000 years ago, in a state of desolation?

"Yes", say the Creationist. I beg to differ, however.

Creationism", unlike the popular idea, is not "just" the knowledge that creation was created by the Creator. If that would be the case, I could have been labeled a "Creationist" myself. However, I am not. And still, I believe that Jah created creation and no I do not believe that he did that through Darwin, so to speak. I do not believe mankind comes from the proverbial monkey.

And I beg to differ, Sirs!

First of all, the Bible does not say at all that "In the beginning was the first day" at all. In fact, Genesis starts with the words:

"In The Beginning, God Created The Heaven And The Earth. And The Earth Was Without Form, And Void, And Darkness Was Upon The Face Of The Deep." (Genesis 1:1,2a)

When you read on, you see that Jah wipes the darkness of the earth and makes a difference between day and night. That wiping away of the darkness is the first act of the "creation week", which I would rather call a re-creation week.

First of all, the word "was" is not necessarily translated in the right way. The word could also be "became". Whether you use the word "was", or "became", therefore, requires more than literally translating the first lines of Genesis.

When you translate the word as "was", you make Genesis say, that Jah created the earth without "form and void", or, as the Hebrew phrase goes, "Tohu va Bohu". This phrase is used in the Bible only a couple of times, so let's take a look where they are used as well.

Let's go to Isaiah, where Jah speaks about His judgments:

"He shall stretch out upon it the line of confusion, and the stones of emptiness" (Isaiah 34:11b)

Obviously, since you cannot "create destruction" and Tohu va Bohu does indicate destruction rather than a creative act, it is not right to translate the first lines of Genesis using the word "was" to describe the original state of creation "in the beginning".

But there is more usage of the word Tohu va Bohu. This next usage, also Isaiah quoting JAH, says this:

"For thus saith the LORD that created the heavens; God himself that formed the earth and made it; he hath established it, he created it not in vain, he formed it to be inhabited: I [am] the LORD; and [there is] none else." (Isaiah 45:18)

So here we have Jah Himself saying, that He did not create the earth "Tohu va Bohu". And since we already know, that the words describe a situation after the judgement of the Most High, we might get an indication as to what really happened, somewhere between "In The Beginning" and the first day of the week in Genesis.

Jeremiah helps us out. He was taken to that time, before mankind was created. He describes a situation that is in no way like the ones creationists describe when they make God in their image, a God that creates empty things. Take a look:

Obviously, we speak about a situation that is not the original creation, even though Jeremiah is taken to that time when the earth was Tohu va Bohu in Genesis 1:1. It is obvious, that the earth became Tohu va Bohu!

So, now we have Jah Himself saying that He did not create the earth in this situation, we have two accounts that tell us Tohu va Bohu is a situation after a judgement of Jah, and we have Jeremiah who speaks about this time in more detail.

Jeremiah specifically says "there is no man", but he also speaks about "cities". He speaks about a civilization on this planet before mankind was ever created!

Now, other than the fact that it is more than interesting to realize that there were civilizations before mankind was created, it is equally so that the God of the creationists is not the God that wrote the Bible in the original language. And not only because it is an oxymoron to "create emptiness".

A couple of months ago I wrote about Sodomy, which most people think is another word for homosexuality where the Bible uses the word heteros to describe what the Sodomites were doing. Here, too, do we see that very same God of the creationists at work. Their denial of the fact that there are more intelligent beings than just mankind, leads to their painting of a God Who makes people pay for His... mistakes!

We can go on, for example, and look to the battles of Israel against the Canaanites as described in Exodus and so on. We can look at JAH telling the Israelites to kill other human beings, or we can look at the original text and read how these were not human beings at all but descendants of the Nephilim, unholy offspring of angelic beings with daughters of men.

All of this, however, is lost to the creationists who do not seem to be able to grasp that although mankind is created in the Image of JAH, this by no means means that (wo)man is the only intelligent being in creation and that human civilization is all that ever was in Jah's creation.

It is clear, that the KJV is not 100% correct. The mistranslations start already in the very first line. How important is it, to know Jah personally in order to understand just what is written in the Bible, especially when you consider these mistranslations? Asking this question is answering it.